We recap some of the key moments and antecedents underlying the separatist challenge in Catalonia, the attempts to ‘internationalise the conflict’ and its European dimension, as well as possible future scenarios.

Dossier · The independence conflict in Catalonia

The Catalan government’s Centre d’Estudis d’Opinió publishes a survey in which only 34% of respondents opt for an independent state, the lowest level in the past seven years, before the sovereignty process began (it reached up to 48.5% in 2013). Days before the College of Property Registrars had noted that the negative balance in the number of companies with head offices in Catalonia was of 4,080 since January 2017.

Conclusion of the trial at the Supreme Court. The sentence is expected for the Autumn, when the pro-independence movement is expected to take advantage of the reaction against the convictions and expected heavy sentences amongst its followers to cause further mass mobilisations. Neither are a further round of regional elections off the cards (the fourth consecutive occasion for early elections since September 2012).

Pedro Sánchez’s Socialist Party (PSOE) gains the most votes. In Catalonia the overall leader is ERC but pro-independence parties total only 39.4% of the ballot.

The trial of the politicians who organised the illegal referendum of 1 October and unilaterally declared independence opens at the Supreme Court. The Prosecution claims it was a case of rebellion while for the State Attorney, dependant on the government, those involved should be convicted only for sedition and minor criminal offenses. The difference between the two depends on whether it is proved that violence was involved, with sentences accordingly more or less severe.

Coinciding with the anniversary of the past regional elections, the Spanish Cabinet meets in Barcelona. The session is held with no incident of note save some protests and tension in the streets. The Prime Minister, Pedro Sánchez, take advantage of the occasion to visit the Catalan Premier, Quim Torra, giving rise to much criticism from the opposition parties PP and Ciudadanos.

Torra’s assumption of office ends the application of Article 155 of the Constitution that had suspended Catalan self-government. His inauguration coincides with Pedro Sanchez’s.

The leader of the Socialist party (PSOE) is elected new Prime Minister in the Congress of Deputies following the success of the motion of no confidence against the incumbent, Mariano Rajoy. The motion, presented by the socialists on publication of the verdict of guilty in the Gürtel corruption case, is supported by the Catalan pro-independence parties. In his inauguration speech, Sánchez affirms that his government ‘wants Catalonia in Spain but that it will listen to Catalonia’.

Scotland and London: a constitutional crisis over Brexit?

Andrés Ortega — The Scottish parliament rejected the Brexit or European Union Withdrawal Bill, drawn up by the Theresa May’s Conservative government. A majority wants to prevent that London uses Brexit to strengthen its control over Scotland.

Quim Torra is elected President of the Generalitat de Catalunya (regional Premier) 199 days after his predecessor, Carles Puigdemont, was removed from office. His investiture succeeds given the abstention of the four members of the leftist CUP.

A Compromise for Catalonia?

Miguel Otero-Iglesias — Catalan separatists won't win independence for their region. But if they reengage with Spain's state institutions and build alliances with other political forces that want a federal system, they could achieve far-reaching constitutional reform.

Constitution of the new Parliament of Catalonia and election of Roger Torrent (ERC) as speaker. However, the election of Catalan Premier is delayed as the pro-independence parties first propose Carles Puigdemont, who remains in Brussels, as their candidate and then Junts per Catalunya’s number 2 Jordi Sànchez, who is currently in prison.

On a record turnout of 82%, Ciutadans, led by Inés Arrimadas, won the elections on a quarter of total votes. However, the three pro-independence parties combined –Junts per Catalunya-PDeCAT, Esquerra Republicana and CUP– won 70 seats, two above the 68 necessary for an absolute majority, but again without capturing a majority of the vote (47.5%). Partido Popular (PP), the party of the central government in Madrid, recorded its worst results ever in Catalonia, with four seats and 4% of the vote.

Election campaign kicks off in Catalonia

Esquerra Republicana and PDeCAT fail to agree on continuing their Junts pel Sí coalition. All the main political parties field the same lead candidates as in the previous election, including Carles Puigdemont, who remains in Brussels, and Oriol Junqueras, still in prison. 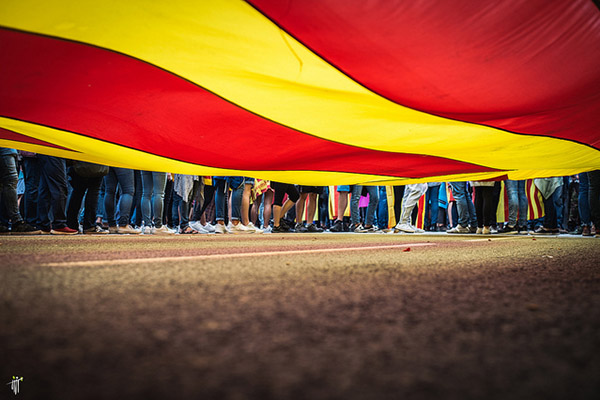 Miguel Otero-Iglesias — How can it be that Catalonia, one of the most prosperous, autonomous, cosmopolitan, modern and attractive regions on earth, is about to jump over a cliff?

The speaker of the Catalan Parliament and independence leader Carme Forcadell declares in the Spanish High Court that she respects legality and that the declaration of independence was symbolic. The fiasco of the unilateral declaration can be considered the termination of the sovereignty process understood as a way of gaining a swift and easy secession. That does not imply, however, that the conflict has come to an end.

The judge orders the ex Deputy Prime Minister, Oriol Junqueras, and eight former Catalan Ministers to be sent to jail on remand. Carles Puigdemont remains in Brussels with four other ex Ministers, where they travelled two days after their dismissal. He is summoned to appear before a Belgian court after a European arrest warrant is issued by the Spanish courts. A general strike is called in Catalonia for 8 November to protest against the imprisonments (participation is patchy) and a mass demonstration in Barcelona for 12 November.

Article 155 is deployed without any resistance from the deposed Catalan authorities. Nearly 100 countries, the EU, NATO and the United Nations make declarations explicitly rejecting independence during the week that follows. Belgium, Slovenia, Israel and Venezuela are more ambivalent, but no government recognises Catalonia. 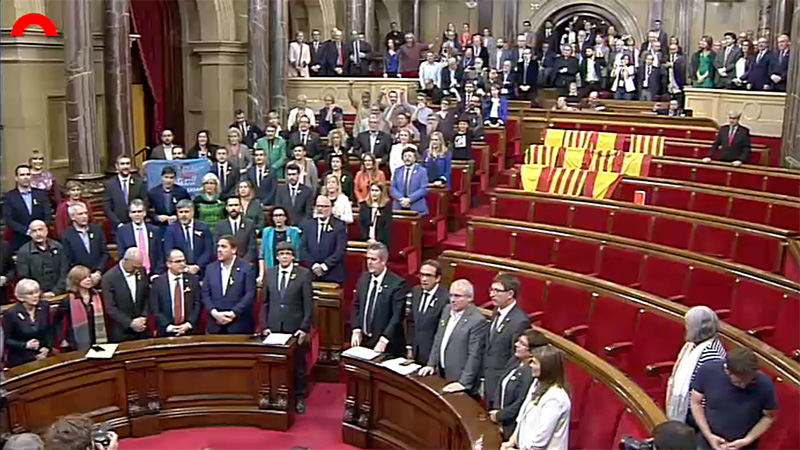 The Catalan Parliament declares the independence of Catalonia

Independence is declared unilaterally after a secret ballot in the Catalan Parliament, with 70 votes cast in favour, 2 blank votes, 10 against and the absence of the Ciutadans, PSC and PP members of parliament. Shortly thereafter the Spanish Senate approves the triggering of Article 155 and Mariano Rajoy’s government dissolves the Catalan Parliament, dismisses the members of the Generalitat and calls regional elections for 21 December 2017.

In a speech in the Catalan Parliament, Carles Puigdemont presents a declaration of independence based upon the ‘popular mandate emanating from the ballot boxes on 1 October’, which he immediately suspends in order to negotiate with the central government.

The following day, the central government triggers the mechanisms for applying Article 155 of the Constitution, which provides for the suspension of autonomy. Meanwhile, hundreds of companies move their registered offices outside the region.

Mass demonstration in Barcelona against independence

Some 350,000 take to the streets of the Catalan capital in favour of Spanish unity. The association behind it, Societat Civil Catalana, organises further large-scale demonstrations against independence on 12 and 29 October, the latter with the explicit support of the constitutionalist parties Ciutadans, PSC and PP de Catalunya.

Not everything has gone badly in Spain

William Chislett — In times of national angst, it is easy to become despondent and fall prey to the false belief that everything is going wrong in Spain.

The King: ‘It is the responsibility of the legitimate powers of state to ensure constitutional order’

A robust televised speech is delivered by King Felipe VI, accusing the Generalitat of placing itself outside the rule of law and democracy. It is watched by 83.5% of viewers in Catalonia, where on the same day a general strike is held, supported by the Generalitat.

Despite attempts to prevent it on the part of the central government and the High Court of Catalonia and the intervention of police officers in anti-riot gear, 42% of the electorate take part in the plebiscite, of whom 90% vote in favour, according to data from the Generalitat.

The Guardia Civil acts to halt the referendum preparations

The police operation, carried out under the orders of the Spanish Attorney General, is met by resistance from independence supports, with some violence being witnessed. The activists Jordi Cuixart and Jordi Sànchez, leaders of the associations that organised the demonstration, will later be arrested on charges of sedition for the gatherings.

The Catalan Parliament approves a law enacting the self-determination referendum, which is binding, and a law of juridical transition and foundation of the Republic, approved by 72 votes in favour with 11 abstentions. The 52 members of parliament from Ciutadans, PSC and PP walk out of the chamber. The next day both laws are suspended by the Constitutional Court.

Puigdemont announces a referendum for 1 October.

The Convergència/PDeCAT member of the Catalan parliament and former mayor of Girona is sworn in because CUP demands the resignation of Artur Mas. Puigdemont promises unilateral independence within 18 months. The leader of ERC, Oriol Junqueras, becomes Deputy Prime Minister.

Ignacio Molina & Miguel Otero-Iglesias, Politico — Catalan independentismo won last Sunday’s regional elections. But it lost the so-called plebiscite on secession. As a result, Catalonia now faces a difficult future with its society divided and the links with the rest of Spain deeply eroded.

The independence movement gains an absolute majority of seats, but not votes

Artur Mas again calls early elections, which his party, Convergència, contests in coalition with ERC under the name of Junts pel Sí. They do not obtain an absolute majority and have to rely on the radical party CUP to govern. Support for the antinationalist opposition (Ciutadans) again rises.

Despite the fact that the separatist parties (Junts pel Sí and CUP) fail to obtain 50% of votes cast, on 27 October the Declaration of the Initiation of the Independence Process is approved by 72 votes to 63.

CiU splits and the moderate nationalists of Unió leave. Convergència declares itself to be an explicitly separatist party. In July 2016 it renames itself Partit Demòcrata Europeu Català (PDeCAT).

An independence referendum unilaterally organised by the Generalitat is held, despite being banned by the Constitutional Court. Approximately 33% of the electorate take part and 1.8 million vote in favour of independence. On 13 March 2017 the High Court of Catalonia disqualifies Mas for disobedience.

A breakaway from the UK is rejected by 55.3% of the electorate. Turnout is close to 85%, the highest in any British vote since the introduction of universal suffrage. 🗳️ Results at BBC.com

The Spanish Congress of Deputies rejects by a large majority a proposal to give the Generalitat (the Catalan regional government) powers to organise a legal referendum.

European Commission: ‘a new independent state would become a third country with respect to the EU’

The President of the European Commission, José Manuel Durão Barroso, states that the treaties would cease to apply to an independent Scotland or Catalonia, citing the doctrine that had been in place for years. This pronouncement will be repeated by him on numerous occasions, by his successor from 2014 onwards, Jean Claude Juncker, and by other authorities at the EU institutions.

Second mass-participation Diada with the forming of a human chain that stretches 400 km from one end of Catalonia to another.

Artur Mas (CiU) calls elections to try to capitalise on the Diada mobilisation, but secures a poor result for his party. Support for more explicit separatism (ERC) rises, but also the anti-nationalist opposition (Ciutadans and PP). Mas carries on as regional Prime Minister, but is more polarised by virtue of relying on ERC.

Independence and the European Union

Joseph Weiler — The only merit in a Catalonian referendum would be to allow the Catalans to have the good sense decisively to reject the proposal.

The Edinburgh Agreement between the United Kingdom and Scotland

The British government signs with the Scottish devolved government the Edinburgh Agreement that establishes the terms for a legal independence referendum. The decision is later approved by the British Parliament and the Scottish Assembly in 2013 and the date is set for September 2014.

Some 600,000 people demonstrate in Barcelona during the Diada (national day of Catalonia). Under the slogan Catalunya, nou estat d’Europa ('Catalonia, new state of Europe') the demonstration, called by the Catalan National Assembly association, marks the beginning of the so-called sovereignty process.