Donald Trump concluded the first year of his presidential term with low levels of popular approval, facing difficulties in achieving many of his election promises, and with his country in clear retreat from the international arena. In this analysis we assess how the world has responded to his policies and then look ahead at what to expect in 2018.

More than a year has passed since Donald Trump became President of the US, surprising much of the world and many of his own supporters. Since then we have witnessed a very unconventional presidency, with a combative and unpredictable chief, a ‘ground breaker’ in some senses, but also very ignorant of the very essence of politics. He has directed the country with executive orders and tweets. At the frequent appearance of Trump’s tweets, both domestic and foreign audiences have learned to pause for a breath of air and to wait for the ‘interpretation’ to come from the President’s staff.

He has confronted the senators of his own party even though he needs their votes. He has been accused of obstruction of justice, as an investigation is underway to determine whether Trump conspired with Russia somehow in the 2016 elections, feeding the debate over his possible impeachment. He has made enemies among his allies, and insulted and contradicted members of his own team, sending confusing messages often inconsistent with his own policies. Meanwhile, a series of natural disasters have also shaken the country, bringing into sharp relief his own lack of empathy.

He has energetically pursued his campaign promises and, in some cases, has registered important achievements: as with the passage of  the largest tax cut in the country’s history, the publication of the National Security Strategy, the appointment of Neil Gorsuch as Supreme Court judge, as well as the naming of a series of young and conservative judges to serve on federal courts. Although he has failed to repeal and replace Barack Obama’s healthcare legislation, known colloquially as ‘Obamacare’, or to build the Mexican border wall, Trump has had relative success with respect to immigration. He has also followed through on his commitment to withdraw from the Trans-Pacific Partnership (TTP) and taken the first steps toward revising NAFTA (the North American Free Trade Association).

His public approval ratings continue to be the lowest in the history of the country, but Trump maintains intact the confidence of a large part of the electorate that applauds his ‘authenticity’. He continues to appear at rallies in cities around the country as if the campaign were still on.

Despite his style, his tweets, his attacks on US democratic norms –like freedom of the press and respect for the courts– during the first year of his term the US constitutional system has done the job for which it was conceived: that is to say, to put into play the time-honoured mechanism of ‘checks and balances’. 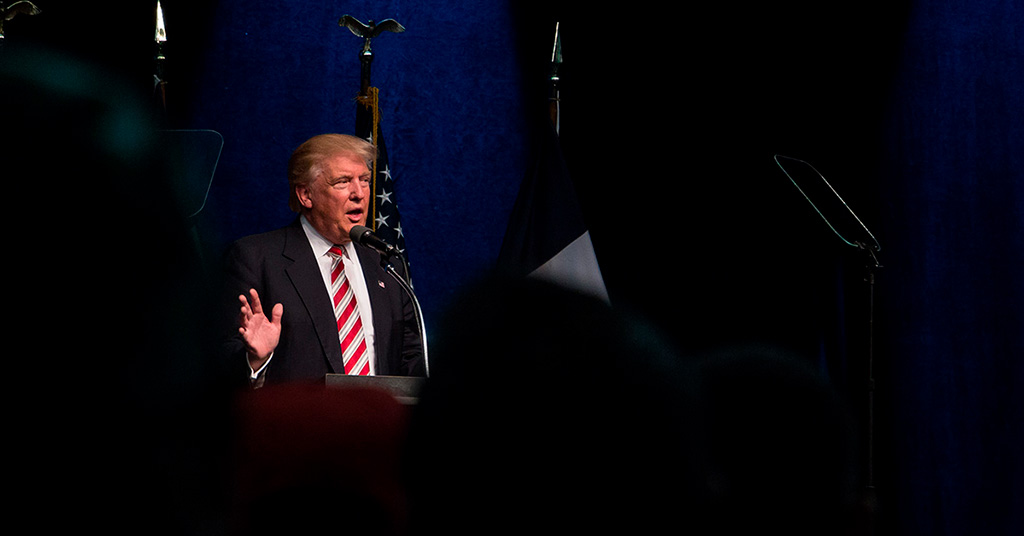 Trump, Europe and one year into the US Presidency

Towers and walls against multiculturalism: Hispanics and Spanish in the Trump Presidency

Trump and what caused him

The world without the US

After Trump’s election victory, there were many forecasts of forecasts of political volatility for 2017, above all in the realm of international cooperation, one of the best ways for countries of the world to engage in international affairs. The new President has promised to ‘make America great again’ by renegotiating international agreements that he considers unfair and against the interests of his country, and by questioning the value of long-standing international institutions. From January 2017, the policy of ‘America first’ began to lead the country into a slow abdication of its global leadership role and even its role as leader of the free world. All US Presidents since World War II have put the US first, pursuing American interests and prioritising military power, but they have also understood that the values and culture of the US –its soft power– constituted one of the principal ingredients of its global influence.

Today the statistics suggest that Americans are tired of carrying the burden of global leadership and of supporting democracy internationally, of promoting free trade and of defending their allies. Although they want a cheaper foreign policy, they also have difficulties accepting the decline in influence that comes with it.

Contrary to the expectations of a significant shake-up with the arrival of Trump, international and multilateral cooperation on key issues like climate change and migration carry on, even as the US withdraws. Furthermore, some countries like China and France have pushed ahead with the goal of possibly occupying the leadership vacuum left behind by the gradual withdrawal of the US.

The world has made some important progress, despite the counter currents generated by Trump. The most important came with the announcement that the US would withdraw from the Paris Agreement; this prompted a unanimous response from the rest of the world’s countries to carry on in the fight against climate change. Trump’s protectionist rhetoric has not stopped global trade from increasing in 2017, according to the IMF, or the proliferation of recent trade accords between various international actors. Washington’s decision to not certify the nuclear deal with Iran –a gesture with little real meaning for the moment– is affecting US diplomacy, and it has undermined the country’s credibility by transmitting the message that the US is an unreliable partner that does not meet its commitments. The formal recognition of Jerusalem as the capital of Israel also provoked indignation in many countries and led to protests, if limited. The vote in the General Assembly of the UN on 21 December 128 in favour and nine against (with 35 abstentions), approved a resolution of condemnation of that US decision, which symbolises the isolationism toward which the Administration is driving the country.

Palestina ya no importa

Transforming the United Nations: countering the US budget-cut threats

From the G20 to the G-Zero: global governance without Trump?

Can such a US presidency survive for long, at least as Donald Trump understands the job and the behaviour appropriate to the office? For now, the new year has begun as the previous year ended, with incendiary tweets and foreign policy muscle-flexing with his support to the protests in Iran and his announcement freezing military assistance to Pakistan, along with his threats to cut off aid to the Palestinians and his aggressive dialectic with the North Korean leader.

The President has set an ambitious agenda: he continues to pursue his objective of repealing and replacing Obamacare; he will carry on with immigration reforms and the design of a new infrastructure development plan; and he will begin to execute his new National Security Strategy with North Korea identified as the principal threat. Nevertheless, the most urgent task for the Administration will be to negotiate the new budget along with the federal government debt limit. The rest of the world will wait and see what ultimately comes of his gesture of attending the World Economic Summit in Davos.

There are speculations to meet everyone’s tastes but all of them point to the November 2018 mid-term elections –when the new Administration will be put to its first real test– as a possible inflection point for Trump.

Taking into account what has occurred during past mid-term elections, in which the President’s party tends to lose the majority –or at least many seats– in the House of Representatives, it is likely that these elections will be focused on local political issues; but they will also become a referendum on the Administration and especially the figure of the President who is, at the end of the day, responsible for reanimating the ‘American spirit’ among the citizens and raising their confidence in the future.

The Democrats need to take away 24 seats from the Republicans, overall, to gain control of the House. And they have a chance: in 2017 the numbers position them ever better than the Republics in 2009 on the eve of their great mid-term victory in 2010 against Obama’s Democrats.

Trump has the advantage of a strengthening economy, with low levels of unemployment and the stock market at historic highs. In addition, the latest data point to a rise in middle-class incomes and a reduction in poverty. And one should not forget that Americans are well accustomed to the reality show that the presidency has become. After all, Trump has not taken them into any new war; nor has it been proved that the US President conspired or colluded with the Russians in the 2016 presidential election. If things stay like that, the evaluation of the President will not be as bad as the Democrats hope and the Republicans fear.